I have been taking ibuprofen for many years, intermittently but consistently, for various recurring sorts of ills. Sore elbows, twanged fingers, sore back. I probably take ibuprofen no more than once or twice a week on average, with none for many weeks, and it would usually be 200 milligrams but occasionally twice that amount. What is the latest thinking and research on moderate but longterm use? Do climbers’ livers start screaming, “No more!” or just silently fall apart?

Aversion to pain in the second-biggest preoccupation of modern society. Money, the driving force of the Machiavellian pharmaceutical giants, is the first. That’s right, ladies and gents, you are being turned into a bunch of Nancies by corporate puppeteers to the point that the prospect of removing a superficial splinter without an anesthetic will cause you to faint.

Pill popping is all the rage. From lolly stores to disco floors, from truck drivers to gym junkies, the problem can be resolved by the magic pill that will transport you to the place you need to be. In fact, 16,500 peeps each year will transcend themselves all the way to heaven by way of NSAIDS like ibuprofen, more than are killed in the USA by AIDS and cervical cancer. 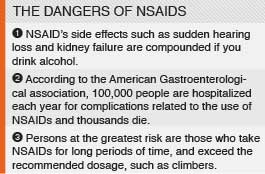 Whoa! Life does not have a reverse, so if you want to go at it full throttle on jet fuel, you might want to remember the steering wheel.

Damage by way of minor acute injury will do better with a bag of ice than anti-inflammatory (AI) drugs. Chronic issues such as sore elbows and a bad back will do better if you actually do something about fixing the problem rather than applying Band-Aids. Out of sight, out of mind is the trick of a dyslexic mentalist with an equally inept audience. Or possibly just human nature.

Although a few NSAIDs may not be too harmful, the notion that they are without risk is categorically incorrect. Recent data suggests that there is no safe dose in young people and, like a lightning bolt to the forehead of modern medicine, the greatest risk for ulcers is in the first two weeks of use, contrary to previous understanding.

I would guess that you could quite easily not take any medication. The pain you do feel may well propel you into doing something constructive about the injury. If it’s a minor acute issue, toughen up, princess. Managing a climbing injury is tough. When it comes to major injuries, everyone knows that ...